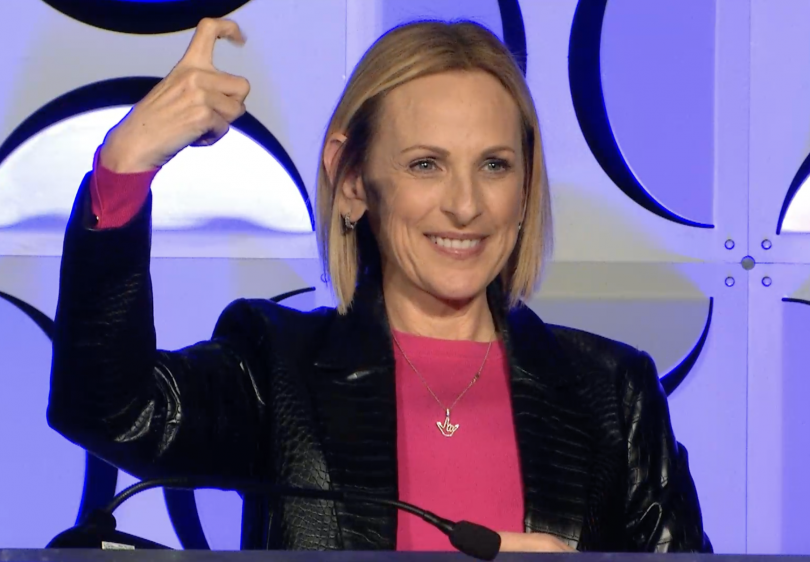 Matlin — who is also an Ambassador for Disability Rights for the ACLU — used sign language throughout her presentation alongside her longtime translator Jack Jason at today’s General Session of ICON 2022 in Grapevine, Texas.

“My hope is to highlight how diversity, inclusivity, accessibility and equity can [lead to equality],” she said. Through her advocacy work, Matlin aims to break down barriers and misperceptions related to accessibility and diversity.

She spoke of overcoming challenges in life, including being diagnosed as deaf at 18 months, an addiction to drugs that began in her teens, and her journey to become an actress.

Matlin noted that she was in a rehab facility when she learned of her Oscar nomination for “Children of a Lesser God” in 1986. She asked her publicist not to tell anyone where she was and had him turn down interviews, photo shoots and calls until she got better.

She went on to win an Academy Award for the film and has now been sober for 35 years, despite those who doubted her and the negativity in the media — one writer said she won out of pity and asked his readers if she was really acting. Another magazine wondered if there would be any prospect for her since she was a deaf actor.

“I felt handicapped,” Matlin said after reading the press. “I learned I had to speak up for myself and millions of Americans who received prejudice.”

So Matlin became a fierce advocate for diversity and inclusion, helping find opportunities for deaf actors, fighting for closed captioning on streaming sites and more.“It’s been important for me to remain steadfast,” she said. “We all deserve to be treated equally.”

Matlin grew up in a tight-knit Jewish family, and her parents were always very encouraging. “My parents taught me that no one should ever define me by my deafness,” and not to let obstacles get in the way.

“They treated me as any child should be treated — with love and respect. My parents treated me normally. It didn’t matter that I was deaf,” she said. “They taught me to have an answer for everything. My parents and brothers created an environment that was inclusive and loving and outspoken.”

She said that these lessons about inclusivity at an early age helped her find career success later on. Most recently, she starred in the heartwarming family drama “CODA,” which received three Academy Awards, including Best Picture, this past year.

Lifelong lessons from a TV icon

Another champion of Matlin’s career in the early days was actor Henry Winkler, she revealed. After meeting him at a local theater production when Matlin was in middle school, she told him she wanted to be an actor. He gave her life-changing words of encouragement: “Marlee, you can be whatever you want to be.”

Winkler had also faced ignorance and doubt from his teachers growing up, as he was dealing with undiagnosed dyslexia. He learned to turn the negatives into positives, and went on to excel at acting.

“I needed more than my determination to prove others wrong — [I needed] a mentor to help me see beyond the barriers,” she said. “Henry and his wife stood by me ever since that day at the theater.”

Matlin visited the Winklers holding her Academy Award after the win. “You proved them wrong, and you’re not finished — not by a long shot,” Winkler said to Matlin.

They welcomed her into their home for the weekend, and she stayed with them for two years. “Henry reiterated his support for me in various ways, including this quote: ‘If you will it, it is not a dream.’”

“Rather than wait for things to happen and wait for offers to come in, I took matters into my own hands and made things happen, she said. “I started my own production company, and I pitched others my ideas.”

Whoopi Goldberg is another mentor who helped her stand her ground, telling Matlin not to let people put her in a box.

Ignore the naysayers and the labels, she told Matlin, adding: Always look forward and never look back.

Continued challenges in work and life

While Matlin notes that things are looking up these days, she’s still often challenged with ignorance and misunderstanding (including losing a role because she asked for an interpreter character to be put into the show).

“We all face barriers,” including the past several years as the COVID-19 pandemic has challenged us. America has proven itself to be resilient in the workplace, but people with disabilities are often left behind and there’s a failure to include them, she said.

“There continues to be a barrier to full inclusion when it comes to disabilities,” Matlin said. “People have forgotten that disability is diversity.”

Why are barriers to full inclusion still in place? she asked, noting that full inclusion supports education, employment and the economy. “Barriers — whether real or perceived — should never stop anyone from realizing their true potential,” Matlin said.

In closing, she relayed one of her favorite folk stories, “The Diamond,” about the importance of recognizing that perfection comes in many forms.

“And whenever there is a barrier, we should all seek out a little craftsman [from the story] in all of us to offer solutions,” she said. “Armed with the knowledge that diversity, inclusivity, equity and access must be part of the new normal as we reach for success, [we need to be] looking forward, as Whoopi said, and never looking back.”

Matlin left the attentive and appreciative PRSA audience with a formula for success: “Courage + dreams = success.”

She then invited those seated in the ballroom to join her as she showed them how to say these three words in sign language, “reaffirming that each one of us has the courage to look at diversity as a strength, married with a desire to dream big,” Matlin said. “And if you do that, we can all achieve success at anything we set our sights on.”

“Though the world thinks that just because I’m deaf, I live in a world of silence,” Matlin said in closing. “But silence is the last thing the world will ever hear from me — and I hope the same is true for you.”