As trust in American institutions declines, companies should understand who they are and be consistent in how they present themselves, said Frank X. Shaw, corporate vice president, communications at Microsoft.

“Any gap in that [consistency] causes you to degrade trust,” he said. “Trust isn’t built overnight, nor is it generally lost overnight. It requires a lot of ongoing work that involves introspection” and activity.

Shaw was one of three keynote panelists for the General Session on Oct. 11 titled “Building Trust in a Distrustful Age” during PRSA’s ICON 2021. As the virtual event’s moderator, PRSA CEO Linda Thomas Brooks asked the panelists how organizations can build, maintain and regain trust in an era of misinformation, cybersecurity threats and social-political upheaval. 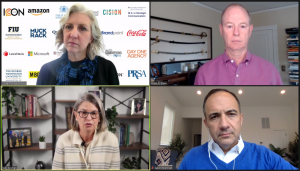 To earn trust during its development of the coronavirus vaccine, Pfizer embedded journalists and a film crew within the company “at the risk of potentially documenting our failure, but, more important, to create a believable, credible record,” said panelist Sally Susman, the pharmaceutical giant’s executive vice president and chief corporate affairs officer.

“We’re going to be about a change,” Sherinian said. “When people started to repeat that message,” it was his “biggest metric of a trust movement.”

Trust ‘can’t be a communications strategy.’

Daily decisions either help create or erode trust, Shaw said. To build trust with the public, companies “have to commit to it at all levels of the organization. It can’t be a comms strategy, a stunt or a PR tactic. It has to be a red thread that gets pulled through everything” to build trust in a sustained manner, rather than episodically. Otherwise, he said, the organization opens itself to accusations of hypocrisy.

When issues of public trust arise, how do the panelists balance the need to respond quickly with the necessity to “carve out time to make a complete and thoughtful assessment?” Thomas Brooks asked.

Organizations should “move at the speed of trust,” Susman said. “You need to come forward swiftly, but with meaningful information.”

When a large brand has a trust problem, “You’re not going to be able to dig yourself out of the crisis immediately,” Sherinian said. “It’s going to take telling the story multiple times.” In the process, he said, the company might discover that someone is blaming it for an issue that’s not directly related to the organization, despite the perception that it is.

“When you’re on the ropes, there’s this urge to fire back right away,” Shaw said. “But you might have to stay on the ropes until the round ends, and then you can recover.”

Shaw said his team looks for “the characteristics of a charismatic story” that might spread and undermine trust in the company, even from a social media account with a small following. But given the speed of today’s news cycle — only a couple of hours before the next headline breaks — sometimes it’s best not to start another news cycle by responding, he said.

Philip Morris International has learned from faith traditions and institutions, Sherinian said. “They’ve taught us that, when there’s a crisis, we have to be covenantal — not transactional,” to have agreements with different groups of people within civil society. This approach “will help you decide when you need to react,” he said.

To further enhance trust, choose the right spokespeople, Shaw advised. “Think about the audience you’re trying to reach. Somewhere in the organization is someone who represents that audience” and can undergo media training. He also said that, once a company loses trust, “you lose the ability to tell your own story because people won’t believe you.”

Responding to a question from the  audience, Shaw cautioned that misinformation “could get a lot worse in terms of its impact on brands” and “be used as a weapon against brands.” He recommended that communications people pay attention to research on trends in misinformation and how to counter it.

“We talk about the erosion of trust as something that is happening organically.” Still, in many cases, adversaries are “actively working to share disinformation or to degrade trust in institutions,” Shaw said. “Understanding what those motives are” and who is spreading the falsehoods allows brands to take action.

Susman closed with an optimistic statement: “Truth told in a clear voice will win the day.”