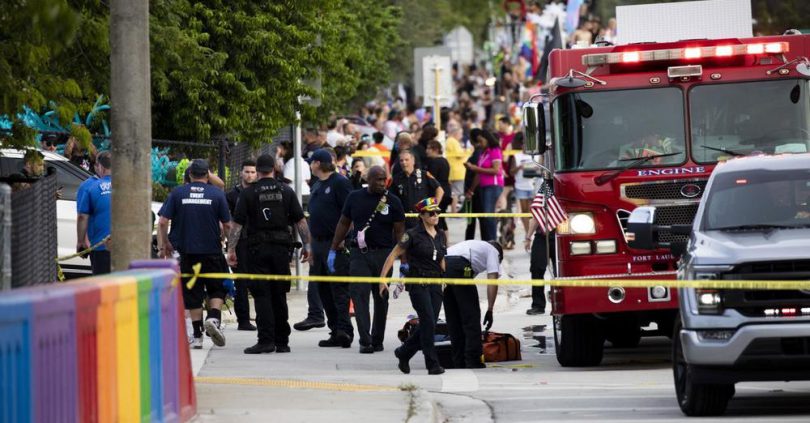 What should have been a festive occasion turned deadly this month when a vehicle suddenly accelerated and crashed through marchers stepping off in the annual Stonewall Pride parade in Wilton Manors, Fla.

A 75-year-old member of the Fort Lauderdale Gay Men’s Chorus died instantly and another sustained critical injuries on Saturday, June 19. The pick-up truck barely missed Congresswoman Debbie Wasserman-Schultz, who was perched on the back of a convertible, and number of local elected officials. Hundreds of marchers fled the scene in shock and disbelief.

Before witnesses had a moment to compose themselves, Fort Lauderdale Mayor Dean Trantalis, the city’s first openly gay leader and a witness to the incident, was quoted telling the already assembled media there had been a “terrorist attack” on the LGBTQ+ community. News spread quickly on social media and residents marked themselves “safe” on Facebook.

After an investigation by the local police and FBI, the accident was determined the following day to be just that — a tragic accident. The 77-year-old driver of the truck, also a member of the chorus, got his foot stuck between the accelerator and brake pedals sending the vehicle through the crowd and across two lanes of traffic.

Mayor Trantalis eventually apologized with what many of his constituents called a “non-apology” that only added to the confusion.

“It terrorized me and all around me… I feared it could be intentional based on what I saw from mere feet away,” he said in a Twitter statement on June 20. “As the facts continue to be pieced together, a picture is emerging of an accident in which a truck careened out of control.”

Later that evening at a community vigil — held against the wishes of the chorus — Trantalis added, “I regret the fact that I said it was a terrorist attack because we found out that it was not. But I don’t regret my feelings. I don’t regret that I felt terrorized by someone who plowed through the crowd,” but the South Florida Sun-Sentinel and other media outlets would call this effort insufficient in editorials.

This crisis could have occurred earlier in the weekend at a Juneteenth observance or at any number of festivals, fairs and other public events in any community across the country. While LGBTQ+, Black Lives Matter and other social justice organizations are justified to anticipate the unthinkable, the central tenets of crisis communications still prevail.

The country is highly polarized — especially around issues of race and culture — and any gathering is now a target for people who have been emboldened over the past decade. A comprehensive crisis communications plan is a necessity. Leaders and spokespeople should be advised against making unqualified statements both to the media and on their own social media channels. Transparency and honesty must inform every decision, action and statement. Mistakes can be costly, even deadly.

If we are to combat misinformation, as addressed by PRSA’s Voices4Everyone initiative, then we need to rely on our training: Have a plan, remember to get the facts first and make clear corrections immediately, if necessary.

Pride parades and other peaceful demonstrations will continue — there is much work left to do — and we, as professional communicators, can best advance social justice causes by being prepared.