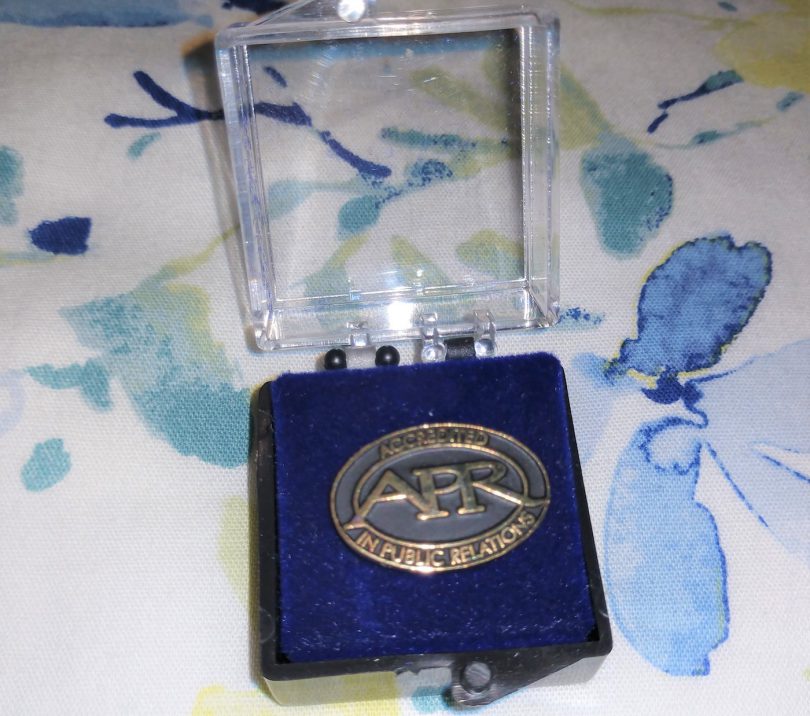 April is Accreditation Month at PRSA. It’s a time to learn about how becoming Accredited in Public Relations can help advance your career. Discover more about earning your APR by visiting PRaccreditation.org.

This month is a reminder to me about one of the best career decisions I ever made — one that almost didn’t happen.

As PR professionals know, the Accreditation in Public Relations (APR) is our profession’s gold standard for recognizing communicators who have demonstrated the “drive, professionalism and principles” that set them apart from colleagues and position them as a leader and mentor in a competitive PR field.

With all due respect, that concise definition fails to cover all that is involved in being an APR and what those three letters at the end of your name and title can mean in a PR career.

As a former journalist coming late to the PR party, I was not aware of what APR represented. My first awareness came at an Orlando agency where I worked with a veteran APR professional, Lorri Shaban. It wasn’t that Shaban talked about being an APR. What impressed me was her knowledge and approach to public relations. She was never “winging it.” She had a surgical focus for managing a wide array of client needs, from launching a new brand to strategically navigating a client through crisis communications.

Shaban’s actions were methodical, intelligent and, most important, successful.

When I learned Shaban was going to lead a new training session for APR hopefuls, I signed up. But after a few classes, I had to drop out due to a work project that was consuming all my time. Still, I had seen in those few classes that there were tested theories and a science to public relations that intrigued me.

For the next year, I thought about signing up again; but I was wary. I had not majored in public relations in college. The veterans in my previous class seemed far more knowledgeable.

I finally cleared my work schedule so that I could start again. I looked forward to each class. The instructors brought the material to life. I studied hard and put together a presentation in which I had confidence. Rather than being drilled, the panel asked thoughtful questions. And at the end, they gave me useful tips for preparing for the exam.

Then work picked up, and I delayed signing up for the exam. I started to get cold feet. I had signed up for an online tutorial at the suggestion of one of the panelists. Even after studying, I found it difficult. If I failed the test, what would my peers think? What would I think about myself?

On the last day possible, I signed up. All of the test openings in the Orlando area were taken, so I would have to take the exam in Tampa. The exam started early, so I decided to book a hotel room the night before, not wanting to botch my chances with any delays on the road. There was a national political convention in Tampa, and I had trouble finding a room. Finally, I found one in a no-frills hotel. I went to bed early but was awakened at 2 a.m. by rowdy conventioneers who partied until 5 a.m. Was this a bad omen? I could only hope my preparation would prevail.

The exam was not easy. But it was not impossible. One of the things I had done to prepare was not only study the material but also practice taking multiple-choice quizzes. I told myself I would not look at the clock until I got to the end. I had heard from others who either ran out of time or barely finished. After I answered the last question, I still had 45 minutes left. I breathed a sigh of relief and went back over any answers that I wanted to think through again.

I was so proud when Shaban handed me my APR pin. It wasn’t just that I was part of the profession’s leaders, it was that I had persevered. I have found that the old adage is true: It isn’t usually what we do we regret but what we wish we had done but never tried.

Now when I have a client with a crisis, I can approach it with the kind of calm and confidence I saw Shaban and other Accredited professionals demonstrate. And one of the best blessings is getting to be part of review panels and help other hopefuls. I try to show the kind of interest and support that others kindly showed me.

I encourage others to start thinking about where they are on their APR journey. Perhaps you just want to know more about it or are far enough along to sign up for the review sessions. When next April comes along, you may be wearing your APR pin, too. At a minimum, you are sure to gain more knowledge and confidence in one of the world’s most exciting, challenging careers.