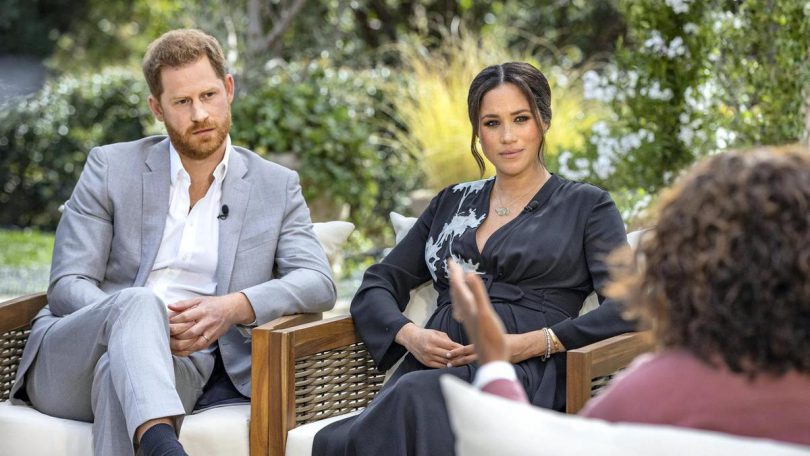 Winfrey has said the Duke and Duchess of Sussex were not given the interview questions in advance. But the couple undoubtedly underwent extensive media training beforehand, which likely included on-camera rehearsals and being grilled by their PR team on the toughest questions they might face.

For Meghan and Harry, the primary goal of the interview was apparently to position themselves in opposition to other members of the British royal family (sometimes called by their nickname, “The Firm”), to explain why they left it and to build their own brand.

As the interview unfolded, the couple reinforced their family values and described milestones in their journey from Buckingham Palace to Montecito, Calif. They attempted to draw a contrast between themselves (Meghan as naive, truth-seeking, sincere, concerned about their son Archie, hurt by tabloid attacks and alleged racial innuendoes) and a royal family which they described as giving them little support.

During the widely seen interview, Prince Harry and Meghan Markle avoided personal attacks on individual members of the royal family, referring instead to what they portrayed as an intransigent institution. They didn’t provide details on controversial issues and instead gave short answers and transitioned to themes such as heart-warming anecdotes about the Queen Mother and Archie.

Critics in social media, the British press and elsewhere were quick to question the self-professed naivete of Markle — a worldly woman who was previously married to a film producer — and Prince Harry, who has had his own share of worldly experiences. But according to polls conducted on both sides of the Atlantic, the couple moved public opinion in their desired direction.

Best practices in media training start with PR professionals researching the journalist. Analyze a year or two of the reporter’s work to discern his or her approach to interviews. Will it likely be friendly or combative?

Brainstorm questions that the reporter might ask your client and then develop short, compelling answers that will make good quotes. Stick to three or four key points in the responses. What insights might be relevant to the reporter’s audience? Provide examples and help the journalist tell a good story. Use metaphors to paint pictures.

Decide in advance what your goal for the interview will be. Perhaps the client seeks to change public opinions, perceptions or behavior; to create or reposition a brand; to counter previous bad press or to correct factual errors.

To help reach your desired outcome for the interview, envision the perfect headline and develop a strategy to see it in print (e.g., “Alleging Bullying and Racism, Prince Harry, Wife Megan Markle Leave Royal Family, Exile to California”). Plan to divulge news in the interview that will benefit the journalist, such as Markle revealing the sex of her new baby.

When training clients for media interviews, we can help them avoid landmines by reminding them not to speculate or make predictions in their responses to reporters’ questions. Counsel them to watch for potential traps such as the “he said/she said” line of questioning that is intended to reveal contradictions and can lead to unfavorable headlines.

Among other best practices for media training, rehearse the interview two or three times. Record those sessions and then critique them. Doing so provides an opportunity to smooth out rough answers and improve the best ones by adding anecdotes and supporting evidence. Rehearsing the interview also helps ensure the client will seem natural, credible and even likable.

When preparing clients for media interviews, we should remind them they are not under subpoena. If a journalist probes for proprietary information, then the client should acknowledge as much and transition to a new topic.

Media training also requires instructing clients to never go “off the record” with reporters or to discuss their own competitors. Clients should assume the tape is always rolling (including the one inside the journalist’s head). Anything a client says could appear in a future article or news segment. Remind them to steer conversations with reporters back to their own strengths and positive attributes, and to always keep working toward that perfect headline.

In summary, Oprah’s sit-down with Harry and Meghan provided a timely reminder of how to prepare for any interview, from the local news, to a major trade interview, to broadcast television or streaming news, by following these eight essential steps:

Tom Gable, APR and Fellow PRSA, is vice chair of Nuffer, Smith Tucker, San Diego’s oldest public relations firm. He has been a regular contributor to national business. PR and marketing media on best practices and emerging trends in public relations and crisis communications, including in his PR Client Service Manual and two international books on crisis PR.