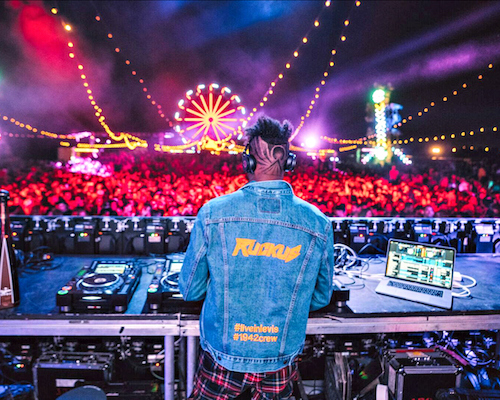 The venues and vibes couldn’t have been more different, but the goals were the same.

One event enticed 8,000 young Hollywood trendsetters to party all night on a dusty stretch of desert, while the other gathered a few dozen top Instagrammers to dine with a celebrity chef aboard a grand-class cruise ship.

The two events — “Neon Carnival,” presented by Levi’s and Don Julio Tequila; and a Princess Cruises dining experience and storytelling workshop with chef Curtis Stone — illustrated the varied approaches that big brands are taking to create sharable experiences and engage their most sought-after social media influencers.

An after-party held during the first weekend of the Coachella Valley Music and Arts Festival, Neon Carnival is staged at an equestrian center in the otherwise quiet desert town of Thermal, Calif., about six miles from the main festival grounds (and 130 miles from Los Angeles). Among the guests who attended this year’s event in April were celebrities Leonardo DiCaprio, Chance the Rapper, Diddy and French Montana.

While Don Julio tapped a high-profile annual gathering to connect with thousands of target influencers, in March Princess Cruises took a very different tack by creating an event from scratch that brought a select group of social media influencers to its own venue: a private meal and food-photography workshop at Chef Curtis Stone’s SHARE Restaurant aboard the Ruby Princess cruise ship.

Despite their different approaches, both events were built around four best practices that can be applied to almost any influencer activation to help you get the best results from your investment.

Don Julio aligned with an existing event well known for attracting young Hollywood insiders. The strategy was to insert the brand into a large gathering of influencers who were already in the mood to celebrate.

In contrast, Princess Cruises sought to engage a far smaller group of influencers — just 50 of Southern California’s top food and lifestyle Instagrammers. To develop an event highlighting Chef Stone’s first restaurant at sea, Princess Cruises turned to BakeSpace.com’s TECHmunch, which produces a traveling series of events for food bloggers and influencers. Creating its own event enabled Princess Cruises to control the entire process and assemble a guest list culled from TECHmunch’s deep bench of influencer relationships.

Show them a good time

As one of two lead Neon Carnival sponsors since 2014, Don Julio enjoys a significant presence at the annual event. This year the brand served signature cocktails from several bars across the venue, including the “Don Julio Airstream Speakeasy,” a retro trailer customized with Don Julio branding. There was also bottle service in the VIP area, featuring the brand’s premium 1942 label. Onstage, DJs (dubbed the “Don Julio 1942 Crew”) wore branded clothing.

Rudy Aldana, director of Tequila Don Julio and Zacapa Rum at parent company Diageo, said the Neon Carnival pop-up playground “lets us connect with influencers when and where they’re ready to celebrate.”

Provide them something useful

Princess Cruises also wanted to show influencers a good time, but its event included an educational component specifically geared toward the participants too. In addition to a cocktail reception and six-course dining experience led by chef Stone, the day included a visual-storytelling workshop with a renowned food photographer — a compelling proposition for the Instagrammers.

“Getting influencers onboard to experience a cruise can be costly and challenging, so we worked with Curtis Stone and TECHmunch to create an event that would provide a small but satisfying taste of our product,” said Sara Dunaj, Princess Cruises’ senior manager of social media.

Dazzle them with an experience they’ll want to share

For Don Julio, the strategy was to become an authentic part of the celebration at Neon Carnival.

“We integrate our brand within the event in a way that helps partygoers live in the moment and have a good time,” Aldana said.

To gauge the event’s success, the Diageo team used metrics such as the number of cocktails served (more than 10,000 this year — mostly margaritas and palomas), the level of talent in attendance, and the number of resulting media impressions that referenced the brand. Also important for the company was that it could use the event to generate its own sharable content, such as a video featuring the brand-ambassador DJs.

Over the past four years, media placements for Don Julio’s Neon Carnival have included coverage in Billboard, Elle, GQ, The Hollywood Reporter, People and many other publications.

For Princess Cruises, the strategy was to bring top influencers aboard the ship to build awareness of its partnership with chef Stone and literally give the Instagrammers a taste of what the company has to offer.

The culinary experience encouraged the content creators to do what comes naturally to them: Take great photos and share the images online. To further boost engagement, content creation and sharing (as well as good times), the TECHmunch team carefully placed the influencers in groups with their friends and others with similar interests.

Within just the first 48 hours, the 50 influencers generated almost 60 million impressions on Instagram and Twitter. The event was represented in 270 Instagram stories and garnered 60,000 photo likes, 1,700 photo comments and 1,600 tweets as tracked by the #TECHmunch hashtag — all of which helped Princess Cruises show rather than tell how sophisticated and delicious cruise dining can be.

The event generated earned-media results as well. One of its invited guests was KTLA-TV tech reporter Rich DeMuro, who covered the workshop for a “How to Take Better Instagram Food Photos” segment that aired numerous times in Los Angeles and on Tribune stations nationwide. He also covered the event on his popular podcast and “Rich on Tech” blog.

“We generated amazing content and scored the broad and immediate reach we wanted to achieve,” Dunaj said. “We also built a positive relationship with top social media influencers who now have an authentic connection to the Princess Cruises brand.”