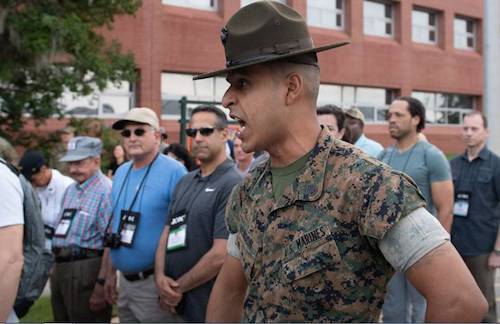 In March, I was selected to participate in this year’s Joint Civilian Orientation Conference (JCOC), the oldest and most prestigious public-liaison program in the U.S. Department of Defense (DOD). The program’s mission is to increase public understanding of national defense by giving American business and community leaders the opportunity to directly observe and engage with the U.S. military.

As one of 36 participants in the conference, I spent seven days, June 10–16, at military installations throughout the southeastern United States, interacting with senior military officials and U.S. service members.

In addition to participating in tactical-training exercises, our group was provided top-level briefings that gave us a deeper understanding of the roles and mission of the U.S. Armed Forces — with an emphasis on the skills, capabilities and equipment employed in defense of our nation. The experience was life-changing for me.

As a professional communicator, I consider the conference to be a model influencer-outreach campaign. It’s part of the DOD’s larger “Know Your Military” (#knowyourmil) effort, aimed at bridging the military-civilian divide. Ninety-nine percent of Americans don’t serve in the military, but for many who do, their service is part of a multi-generational family legacy. In essence, the military has become isolated from those it serves.

The Joint Civilian Orientation Conference and #knowyourmil are just small components of the DOD’s larger efforts to educate, inform and engage the public, and to address misconceptions about the military. The program is staffed and supported by a team of top-notch public affairs professionals who plan and execute this multi-pronged, multi-day effort.

Among the enlightening activities they provided for us, we were treated to a frank discussion with United States Secretary of Defense James N. Mattis and given the opportunity to talk freely with men and women in uniform.

My experience with the conference — the 88th such tour held since 1948 — began at the Pentagon with an executive breakfast that featured top commanders and senior leaders and a question-and-answer session with Secretary Mattis.

During the seven-day tour of military installations that followed, we traveled to the U.S. Coast Guard Sector in Charleston, S.C.; the Marine Corps Recruiting Depot, on Parris Island, S.C.; the 23d Wing, at the Moody Air Force Base in Southern Georgia; the U.S. Army Special Operations Command at Fort Bragg, N.C.; and the Norfolk Naval Station/Joint Expeditionary Base–Little Creek in Norfolk, Va.

I shared the journey with top-notch civilian leaders from both the public and private sectors — people who head some of our nation’s largest, best-known organizations. During the experience we helped one another broaden our perspectives.

At Fort Bragg we spent the day with U.S. Army Special Operations personnel and took part in a simulated hostage situation. Using dogs, helicopters, sharpshooters and simulated bombs and bullets, Army Rangers took down a mock small town and rescued us from a rooftop, ushering us to safety aboard Chinook helicopters.

We were then flown to a dormant airfield from which we ventured into the neighboring woods and dined on roadkill prepared by Army survival specialists. With the Green Berets we celebrated the Army’s 243rd birthday by singing “The Army Goes Rolling Along” and eating cake cut by swords. This action-packed day was just one of seven during the week-long tour.

Each of these weapons has tremendous power, which they convey to all who fire them. My overall experience, both with the weapons and those who regularly use them, reinforced my long-held belief that with power comes responsibility and a duty to practice restraint. I was pleased to learn that the service members I met share this perspective.

Professional communicators can glean a great deal from the military, its overall public affairs efforts, and the Joint Civilian Orientation Conference in particular. Here are several key points the experience taught me:

The experience of participating in the Joint Civilian Orientation Conference reminded me that the military isn’t just about strength, crisp salutes and camouflage uniforms. It’s about the common values of loyalty, duty, respect, integrity and honor. It’s about professionalism, academic rigor, leadership development and a relentless drive to improve.

As much as I learned about our Armed Forces, I learned even more about our society and humanity.