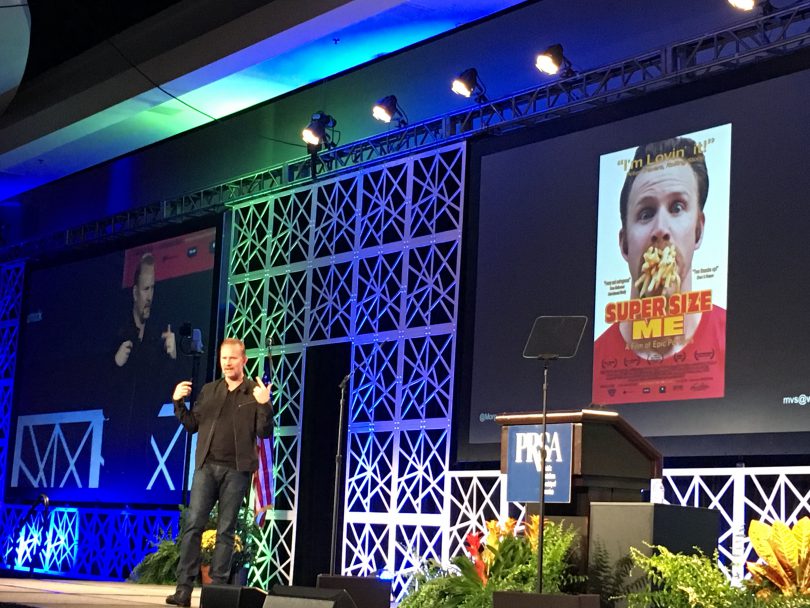 Morgan Spurlock, award-winning filmmaker and host of CNN’s “Inside Man,” delivered the opening keynote at the PRSA 2017 International Conference in Boston on Sunday.

The professional storyteller, best known for his critically acclaimed documentary “Super Size Me,” shared how to “create world-changing content, one story at a time,” peppering the session with video clips from his various films.

“We all want to stand out and be a little different,” he said. “We also want to be helpful, be brilliant, think differently, and lead and not follow — but we don’t want to rock the boat or do things that are too crazy.”

So what does it take to make original stories that actually make a difference?

“You can’t plan for change but you can plan for impact and how you hope to effect change,” Spurlock said. “So own your derivative impact — rip yourself off before someone else does.”

He noted that it takes confidence, courage and nerves to tell stories, and that it’s important to control your own narrative. Also, be ready and willing to take criticism and don’t be afraid to do things that other people think are unusual.

“You need people to believe in your vision,” Spurlock said. “It’s important to have a support system and people who have your back.”

“Now is the time to take risks — it’s a great time to reach people everywhere,” Spurlock said. “Push beyond your comfort zone. The more risks you take, the less risky things become.”

Spurlock referenced his film about branding, “The Greatest Movie Ever Sold,” which had a record number of 3,479 product placements.

“Storytelling and marketing are the same thing,” he said. “Now is the best time in history to be a storyteller. You have to decide which stories you want to tell and connect with in an honest, transparent, authentic way. Create an alignment of ideologies — you want to sell an idea.”

There are now more homes for digital content than ever before. So think about how you can reach your audience where and when they are actually watching the content.

Many influencers just have followers and are not actually influencing anything, he noted. To be successful, you need to listen, which is the hardest thing to do. But humor is a great way to help people listen, engage and learn.

“Deliver consistently,” he said. “With storytelling, once it feels like an ad or a promotion, then you’ve lost the audience.”

Spurlock cited several of his projects that he calls “purpose-driven content,” such as Focus Forward Films and We The Economy.

“This type of content is a bit more challenging and engaging,” he said, adding that reaching millennials should be a priority, as this demographic is the most educated generation in history, will make up 25 percent of the global workforce by 2020, uses multiple screens simultaneously and shares content constantly.

“How do we find champions for change and get our message to reach people?”

That’s the power of storytelling and real content. We have to appeal to emotions and reach the audience in a unique way.

“Finding a good story is only the beginning. Step up and take chances that no one else would. Don’t be afraid for change that may or may not occur,” Spurlock said.

“Getting your story into the hands, hearts and minds of your audience is the greatest accomplishment.”

Amy Jacques is the managing editor of PRSA’s publications, Tactics and The Strategist. A native of Greenville, S.C., she holds a master’s degree in arts journalism from Syracuse University’s S.I. Newhouse School. She also holds a bachelor’s degree in advertising from the University of Georgia’s Grady College and a certificate in magazine and website publishing from New York University.