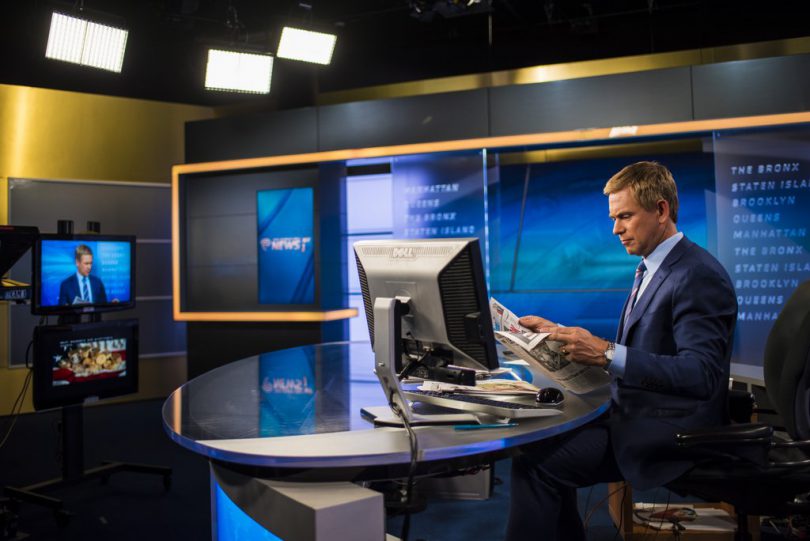 After waking up early to deliver the news as the morning anchor for cable channel NY1, Pat Kiernan is waiting on the L train, making his way home to Brooklyn. Amid some traffic noise and a busy schedule, he finds time to talk with PRSA ahead of the Silver Anvil Awards at New York City’s AXA Equitable Center on June 8.

The award-winning news anchor and actor will serve as the host for the evening, presenting awards to “the best of the best in public relations.”

Here, the TV personality — known for his “In the Papers” feature humorously summarizing the New York daily newspapers — talks about engaging an audience, storytelling, the newsgathering process and work-life balance.

You began your news career in 1988 and have been an on-air personality since the early 1990s. What is the most important thing you’ve learned about engaging an audience from your work as a news anchor and acting in TV shows and films?

It comes down to telling a story and then putting it together in a way that’s compelling. By definition — in any news story or any story you want to tell in any environment — there are always details that you think you should include, you want to include or you might possibly include, but there’s never time for all of them. And if you try to include all of them, you’re not going to hold the attention of your audience. Inputting what you should include and leaving out the things that you shouldn’t include is really the art of storytelling.

In addition to delivering the news each day, you also recently wrote a children’s book, “Good Morning, City.” What do you think are the elements of telling a compelling story?

Well, I’ll tell you one lesson from the book — and children’s book authors have to be ridiculously disciplined with this — is that I had 153 words to tell my story. [Laughs.]

Probably if I told the publisher that I needed 200 words, they would’ve found room for 200 words, but it’s a children’s book — again, they didn’t impose 153 words on me but that’s what it came out to and that was kind of the right length for that.

I think there’s a lesson in that: You can be efficient when you’re forced to be efficient. And the other lesson in that is: Know your audience. The children’s book audience wants 150 words, the Time magazine reader wants 1,500 and somebody who’s looking for a long-form [piece] might want 15,000 words. It’s up to you as the presenter to understand who your audience is and which of those formats might be appropriate for them.

How have mobile devices, social media and an on-the-go audience with 24/7 access to information changed the newsroom? What are the challenges of having to be “on” all the time and what are some of the challenges of today’s newsgathering process?

A couple of things come to mind in the Twitter world. No. 1 is that all journalism is an oversimplification of something — you can’t tell 100 percent of the story. So you are simplifying and then, by the critics’ view, oversimplifying the story when you condense it to one column or 140 characters.

Now, Twitter has become this de-facto newswire. It’s the place where United Airlines made its first statement after its PR crisis a few months ago. It’s the place where the City of New York will put out the advisory to cancel school tomorrow. All of those things that used to happen somewhere else now happen first on Twitter and propagate from there.

And then on the consumer side, what does that mean? It means that we are often not breaking the news as we used to.

That short-form version of the news hits my viewers’ wireless device at the same time it hits mine. They may not see it, because they’re not opted in to whatever alert that is or that Twitter feed. But we used to assume that that news would get to us [as news anchors] and we would disseminate it to the world; often, the world is getting it at or close to the same time we’re getting it.

You have a busy schedule and have to wake up early. What are some tips you can share regarding time management and work-life balance?

Waking up early is actually good for work-life balance, particularly when I had young kids. [Laughs.] You can nap when they nap or you can go to bed early when they go to bed early. Through their entire school-age existence, I have been around in the afternoon. So if there’s a tennis lesson to drive to or a teacher conference after school or something, I’m not skipping out of work for all those things — I was available because I’d been up at some ridiculous hour in the morning. So that’s the one work-life balance thing that comes to mind that you can turn into a positive.

Time management? With the ubiquity of email and the breakdown of the traditional office walls, you can work from anywhere — that double-edged sword where it frees me up to not be at the office but still be involved in decisions. But it also means that I’m always at the office and [part of making] all the decisions.

Learn to manage that to your advantage. You use that as a tool that liberates you and makes your work better, and not a tool that demands that you are connected to work 24/7. And there’s an art to that — in making yourself available but not too available.

My first part-time job in radio news involved Saturday and Sunday radio newscasts. One night a week, I would have to cover a small city council meeting in one of the suburban communities near Edmonton in Alberta, Canada, where I was working at the time. And the guy who hired me, who is still a friend — Grant Ainsley — said, “In a few years, you’re going to be glad you had this experience, but you may not enjoy it at the time. But if you can go out to these small council meetings and come back with a story every Monday, then it will prove your ability as a reporter. And it will improve your ability as a reporter. A lot of people would go into that same meeting and say nothing really happened here.”

And he said, “I’m letting you know that that’s not an acceptable answer — that you can’t come back with nothing after this Monday assignment. We haven’t got enough reporters so you can come back with nothing. You need to figure out what it is that they talked about that’s most interesting and make it into a story.”

Almost 30 years later, I still hold reporters accountable to that standard: “Like, really? Are you sure nothing happened? Or you just didn’t find the story?”

There’s always something to report.