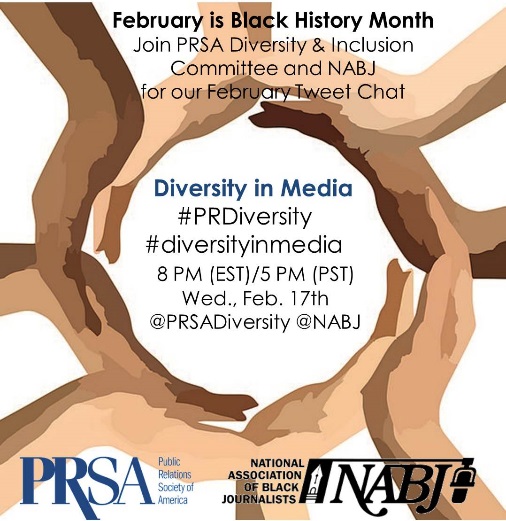 Editor’s note: In celebration of Black History Month in February, PRSA invited leaders in the public relations profession to offer their views on diversity and inclusion and their ideas for achieving greater diversity in the industry.

As leading PR practitioners, it is our responsibility to ensure we capture all sides of the story when pitching to the media.  By sharing diverse perspectives and viewpoints, the stories which are covered by the media will be the most reflective and accurate of our communities.

In recognition of Black History Month, the PRSA Diversity & Inclusion Committee in partnership with the National Association of Black Journalists, hosted a Twitter chat on Wednesday, February 17, 2016, to further discuss this subject and how we can better work with our colleagues in media.

Using the hastags #diversityinmedia #PRDiversity – PRSA members, students, journalists and other media professionals tweeted about this timely subject.  Participants shared how important it is for both sides of the table to have diverse voices – from PR to press, why we as leaders in our professions need to help build that diverse and inclusive pipeline, share our voices in the room, and to advocate for stories which normally wouldn’t be covered by mainstream press.

The conversation continued well after the scheduled hour and sparked engagement across the country.

Here are a few highlights:

T1: 1. As PR pros, we need to capture all sides of the story when pitching to the media. Why is diversity in media important? #PRdiversity

@PRSADiversity Diversity in the media is important to reflect true representation in the communities they serve fairly. #PRDiversity

PERSPECTIVES are so important when you talk about #DiversityInMedia #PRDiversity

Q2: Diverse viewpoints offer most reflective & accurate stories of our communities. What do you do to include those? #PRDiversity

T3, Q1: Looking Ahead: Looking ahead, what can #PR #media #news do to better support #diversityinmedia? #PRDiversity

We aim for inclusion. Diversity is being invited to a party, where inclusion is being asked to dance at the party. #PRDiversity

It's easy to overlook quieter voices in the community. PR pros/media must actively seek out those voices. It's hard work. #PRDiversity

Last question: What can we do to build a diverse pipeline in #PR #media #news? #diversityinmedia #PRDiversity

@PRSADiversity it starts in HS. We need need to enlighten the next generation & introduce them to the fields! #PRDiversity #DiversityInMedia

Provide mentorship at every level — from college freshman to the C-suite. #PRDiversity https://t.co/5J0FKrQezF

Show students and the community how great the industry is and how willing they are to welcome all walks of life. #PRdiversity

Laarni Rosca Dacanay is an award-winning communications professional with proven leadership in developing and implementing system-wide, strategic communication programs tailored for the entertainment and media industry. Currently, she serves in the newly created role as External Communications Manager (PR Manager) for Comcast and previously, Laarni was PR & Communications Consultant to the company after the acquisition of NBCUniversal. Follow Laarni @laarnid1.