Editor’s note: This is the 3rd in a series of guest posts from industry thought leaders predicting key trends that will impact the public relations profession in 2015. Follow the series and join the discussion by using the hashtag #PRin2015. 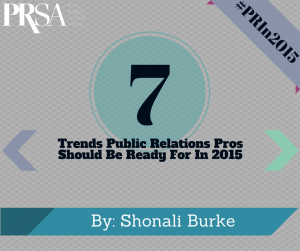 We practice public relations in fascinating times. The profession has seen changes we would never, ever have predicted. I mean, in which universe could you have imagined yourself saying:

Given our track record, I’m somewhat loath to make PR predictions for 2015 that could so easily be upended in a decade or less. But I do think there are seven trends PR pros should be ready to grapple with:

Shonali Burke, ABC, is president & CEO of a social PR consultancy that takes your business communications from corporate codswallop to community cool™. She also teaches at Johns Hopkins and Rutgers, and is the creator of the #measurePR hashtag and Twitter chats, which celebrates five years in 2015.