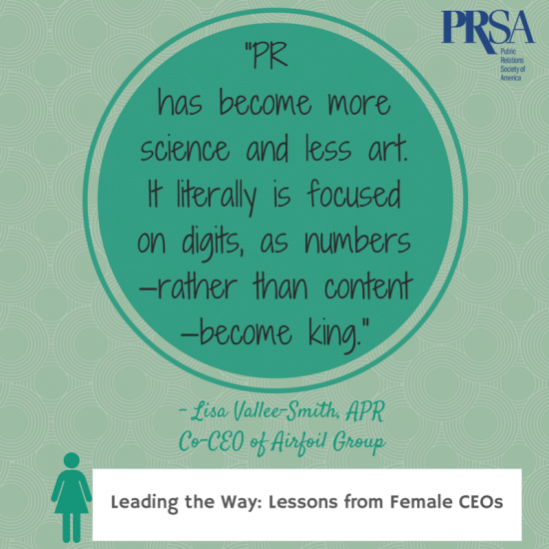 For all the good it has brought to our profession, the digital revolution has done little to resolve the lamentable lack of diversity in PR agencies, in terms of both gender and race, and has caused our industry to sacrifice analytical thinking for numerical analytics.

Previously, PR agencies led by men were often perceived as giants on the local or national scene. Today, many more women own and lead PR agencies, but this very fact helps account for the continued gender imbalance in the ranks of agency account staff.

In a “Lean In” world, where women view themselves as a minority discriminated against in pay, rank and stature, it would be not only counter to the prevailing culture, but also politically imprudent for women agency leaders to acknowledge that their firms hire too many women. Yet, the most recent available U.S. Census figures show that, in 2009, 60.7 percent of all PR practitioners were women, and in 2010 that figure fluctuated only slightly, at 58.8 percent.

Not talking about this imbalance does women a disservice. One implication, for example, may be that, if women indeed are earning less as their advocates assert, PR agencies may be hiring a preponderance of women as a way to reduce salary budgets and simultaneously encourage turnover to avoid nurturing high-priced talent.

No evidence exists that firms are pursuing any such strategy, but by failing to acknowledge, discuss and/or take action on the gender gap, agencies unavoidably raise suspicions. Leadership appears to be afraid to publicly recognize this unspoken status of the PR industry.

Perhaps even more damaging to America’s PR agencies is their deplorable record on diversity of race and national origin. The LAGRANT Foundation (I sit on that organization’s board), seeking to increase the number of ethnic minorities in advertising, public relations and marketing, reports:

Only 3.3 percent of managers (in the public relations industry) are Hispanic (U.S. Department of Labor, 2010); compare this to the U.S. demographic where Hispanics make up 15.4 percent of the total population.

While diversity issues may warp agency effectiveness, a massive change in the day-to-day focus of the industry is eroding the foundations on which it was built. PR has become more science and less art. It literally is focused on digits, as numbers—rather than content—become king. Consequently, the profession becomes further and further removed from the practice and principles of journalism and newswriting, the progenitors of our industry.

Today, PR practitioners are creating messaging and documents that are being held up to standards not so much of understanding, awareness and persuasion, but rather of quantifiable metrics of amplification.

So how can we make things better? I offer seven recommendations:

Public relations is all about conversations. It’s time we started talking with each other about the changes we’re facing, the reasons behind them and the attitudes we must change to manage our diverse futures.

Lisa Vallee-Smith, APR is a co-founder and co-CEO of Airfoil. She is responsible for account innovation, strategic planning, and talent development.  A public relations and marketing communications consultant with more than 25 years of experience, Lisa’s expertise includes primary research, strategic planning, corporate communications, and issues management. Connect with her: LinkedIn, Twitter, Tumblr.