What better time to celebrate the APR than April… it’s even in the name!

A 50th anniversary is something to be elaborately celebrated. This golden event represents longevity, dedication and perseverance. 2014 marks the 50th anniversary of the Accredited in Public Relations (APR) credential and PRSA is celebrating the milestone all year with a special tribute throughout the month of April. 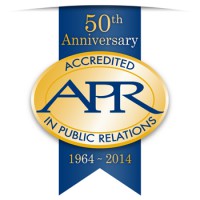 Fifty-years after its inception, the APR continues to be well recognized as the professional gold standard and mark of distinction among communication industry practitioners. Working together, the Universal Accreditation Board, the APR Marketing Committee and the PRSA staff have provided members and leaders alike with a slate of opportunities to not only celebrate the anniversary but also encourage colleagues to pursue Accreditation themselves.

As many professionals who have earned their APR have said, the path to Accreditation is not only a journey worth taking; it’s also a period of reflection and growth that changes the person for the better.

The PRSA has doubled down on its APR celebration this year, not only highlighting the 50th anniversary of the APR throughout the entire year, but also emphasizing April as APR month. Activities which many may have noticed, and some of which will continue throughout the year, have included:

Beyond April, PRSA will continue its celebration of the APR with:

The APR is a distinction of both the greater goals of the profession and the professional. We hope that you have enjoyed the celebration and programs throughout April and have had the opportunity to join in on some of the events held so far this month. We also look forward to continuing the 50th Anniversary celebration with you throughout the remainder of the year.