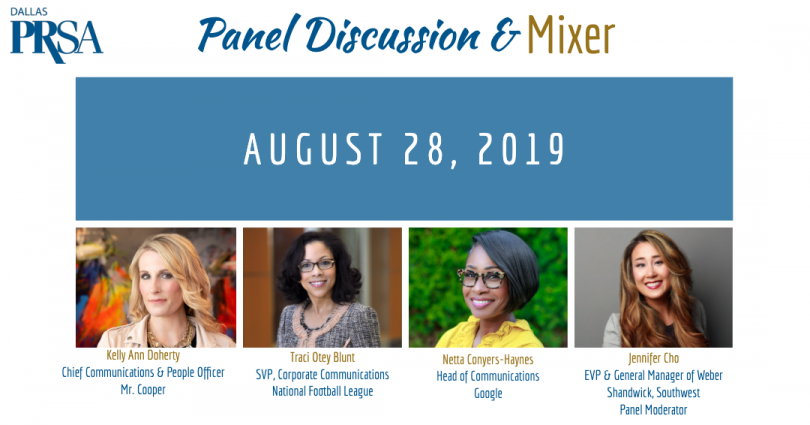 Moderated by Jennifer Cho, executive vice president at Weber Shandwick Southwest, and hosted by PRSA Dallas, the panelists discussed a variety of topics ranging from self-advocacy, promoting inclusiveness in the workplace and advice on advancing your career.

Here are five key takeaways from a memorable, informative night:

1. Seek out allies — and don’t be afraid to be your own advocate. In other words, we need to share our stories and successes — and we all need our own personal board of directors.

“I think you’ll be amazed, sometimes, how people are interested in your story and will be willing to help you,” Conyers-Haynes said. “One thing I’ve learned over time is to lean into my differences. In tech, it’s a white male-dominated world. I’m a unicorn. I stand out. I can’t help but to stand out. It shouldn’t really matter, and so I try to think. ‘How can I use that as an advantage?’”

Make your differences work for you — not against you.

Doherty agreed: “Seek out people who believe in you and who are willing to push you beyond your boundaries. They can see your potential and encourage you to face challenges and fears in a different way. You can find that in the people you work for, people you work with, people who work for you and people you meet through other parts of your work. Understand your differences and let that be a motivation for you to push yourself and try different things. That can make you a success.”

Also remember: “There are allies at different levels, but it’s that person who’s going to be there to speak on your behalf when you’re not there,” Otey Blunt added.

2. Look for ways to build an inclusive team. Conyers-Haynes encourages Google’s recruiting team to seek out diverse candidates, keeping in mind that diversity is more than race. “We all have our biases, whether its conscious or unconscious. We have to come to terms with them and do some soul searching. It all boils down to listening to people and allowing them to express themselves.”

Otey Blunt, who believes in leading by example, pointed out “with a diverse team, you have diversity of thought. With that diversity of thought, you’re challenging your own preconceptions. You’re thinking about things and asking the tough questions you might not have thought to ask before.”

3. Be fearless — and break out of your bubble. As Cho pointed out, oftentimes, leadership roles aren’t published, and those conversations most frequently happen within their own affinity groups, which is partly why the data around women in leadership are rather dismal.

In the United States, women make up 60 to 80 percent of the PR profession’s workforce. However, according to a variety of sources, they occupy just one in five senior positions.

Conyers-Haynes agreed. “A lot of the promotions in the circles are based on who we know. Sometimes, when you are an ‘other,’ the only person like you in the room, you tend to pull back. I would encourage you to put yourself forward. People have to get to know you in order to invite you to that circle.”

Another key is exposure to other groups in your organization and conquering your fears. For example, when Doherty wanted time with her CEO, she simply asked for it. Their breakfast led to the role she has today.

As Otey Blunt pointed out, you have to remind yourself that you are there because you earned it and are qualified.

4. Show up and speak up. “If there are events and activities, be there. You do no good when you’re at your desk and you’re just in your head. You have to get out there,” Doherty said. “If you’re not physically there, if you’re not raising your voice, you’re not an ally. You’re not helping.”

Conyers-Haynes recalled an example many of us can relate to. You’re sitting in a meeting, and you have an idea in your head and someone else says it. Ugh. “Speak up, speak loud, speak quickly, and don’t be afraid of what’s going to happen afterward.”

5. Pay it forward. “Those with great gifts should also pay it forward,” Doherty said. “Think about how you’re being an ally to other people.”

A recent recipient of a Lifetime Achievement Award, Otey Blunt always tries to bring people with her and create a path for others. “That award was me following footsteps of other people that have helped me. My duty is to make sure that I follow the next person behind me,” she said.

Increasing diversity in the workplace — and changing the narrative to increase understanding and promote progress — not only broadens our horizons but also helps us discover new ideas. The result: greater collaboration, increased innovation and new perspectives.

Dione Martin is senior director, strategic communications at Marketwave and is a member of PRSA’s Dallas Chapter Diversity & Inclusion Committee. She has more than 20 years of communications and marketing experience. Reach her at dmartin@marketwave.biz.