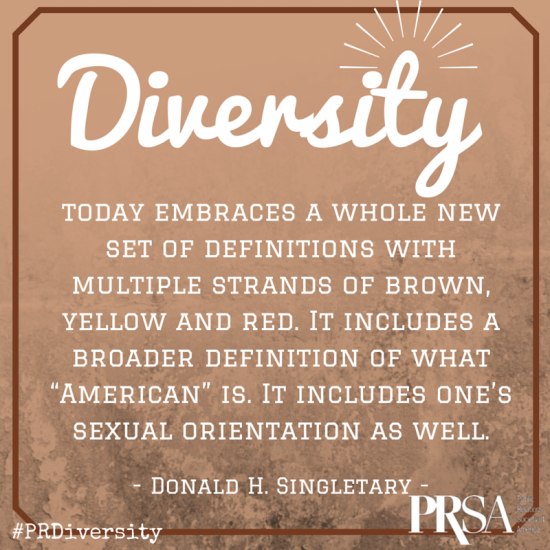 It used to be so simple (for those of us Baby Boomers).

When I was a kid there was no such thing as “diversity” – it was called “integration.”  And that meant Black people and White people. And that meant mostly in the south where my parents hailed from. Certainly didn’t apply to my brother and I growing up in the hodge-podge of races and cultures of Manhattan’s Lower East Side.

Yes there were Latinos back then (nearly all of them Puerto Rican).  And my neighborhood, the Alfred E. Smith projects, was “spittin’ distance” from Chinatown. Those folks were just not an issue yet. Blacks were in the front of the bus on this issue of civil rights.

Diversity today embraces a whole new set of definitions with multiple strands of brown, yellow and red. It includes a broader definition of what “American” is. It includes one’s sexual orientation as well.

When I’m wearing my professor hat, each semester I discuss “Multiculturalism and Diversity” in class.  I go through a brief history of what those terms meant in my lifetime and  the subsequent evolution and  then ask class members: “How do you self-identify?”

I intentionally  leave it an open-question. Some answer with a nationality: “Russian,” or a hyphen: “Chinese-American.”  And among the multitude faces I would have previously defined as “Black” – their responses are more likely to be:  “Haitian,”  “Jamaican,” “Nigerian, “etc.”  One grad student proudly proclaimed: “I am a Gay, Black man.”  In that order. He said: “My father was active in the civil rights movement on the 60s. I told him – that was your movement the Gay movement is mine…”

Change indeed in the ways in which we classify ourselves and others. There is much more freedom today than ever before to self-define.

How does this affect we public relations practitioners? Does it matter?

From a strictly professional standpoint we are seeing the creation and evolvement of new market opportunities.  Any group offers elements of the following ingredients: potential consumers, donors, voters, supporters, friends, enemies, opponents, competitors – and all the other major food groups of target audiences and publics. These are great opportunities – and they pose some challenges as well.

So if you are a member of a group formerly known as minority, or formerly excluded here are some things to remember:

If some of these points sound a bit generic – they should. So are there any differences in dealing with diverse audiences?

Yes – you may still encounter those who do not see the value of appealing to certain groups because they hold on to stereotypical or unenlightened viewpoints. You’ve heard them all before: “they’re too poor,” they don’t vote,”  “they won’t understand.”  But I have found that it is difficult for organizations to deny excellence – especially when it impacts the bottom line. Sometimes they just don’t know, and you can be the one on the room who helps them get it.

You do not have to carry all the weight of your own racial, ethnic or other constituency on your shoulders. But by providing as much excellence as you are capable of in your work and sharing key insights that others may not have been aware of can help both you and your organization move forward.